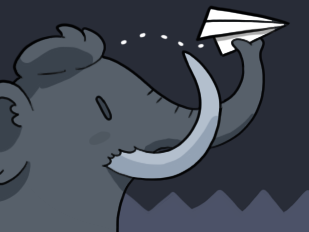 A little while back, I changed my display name on Twitter. Besides my actual name (all your anonymity is belong to us), I added on a second handle: @The_BFOOL@digipres.club. 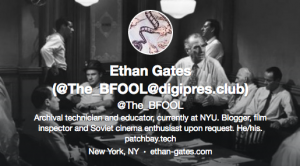 (Not that anyone cares, but if you’ve ever wondered what the deal with the “BFOOL” handles is, it’s a reference to my well-hidden other blog, and a vestige of the brief moment I thought I might make an actual professional go of it as a film writer. I remain latched on to it now out of nostalgia for the anonymous days of internet yore, where signing up for a forum meant coming up with a cool hacker handle rather than providing a UUID that linked my secret enthusiasm for ASMR to my credit score)

What is digipres.club? And why are myself and some other, potentially familiar-to-you users promoting it on Twitter? I wanted to offer a brief primer, and perhaps a few thoughts on community-driven social media and what this platform potentially means to me (feel free to skip out before that part).

In the shortest, but perhaps not simplest, of terms, digipres.club is a Mastodon instance. What is Mastodon? In its own words, Mastodon is a “free, open-source, decentralized microblogging network.”

In its first surge of publicity back in the spring of 2017, most of the techie buzz around Mastodon billed it as “open-source Twitter.” And that’s still probably the quickest way to frame it – the interface looks and feels pretty much exactly like Tweetdeck or many other popular Twitter clients, so if you’ve spent any time around “the birdsite” (as it is not-so-fondly known in the Masto-verse), you’ll get the basic hang of Mastodon almost immediately. You’ll write and post relatively short status updates/posts (“toots” in Mastodon vocabulary, which may seem twee but look how quickly we all got used to literally “tweeting”), and share those posts, including links, photos, videos, etc. etc., among a group of followers who will see your thoughts pop up on their timeline.

Or, er, multiple timelines. This tends to be where people get thrown off with Mastodon, because it’s where the idea of a decentralized, “federated” social platform comes in.

In essence, anyone with access to a server can run Mastodon on it (that’s the free and open-source part). That server (“instance”) hosts “individual user accounts, the content they produce, and the content they subscribe to”: posts (toots), images, video. It’s the same model as Twitter, Facebook, Google, Snapchat – only instead of a tech company hosting and distributing your content, it’s likely one person or maybe a small group of people, working at a drastically reduced scale.

*But* – even if different people are hosting/administrating them, Mastodon instances can still talk to each other, because they’re running the same software, speaking the same language. That’s the idea of “federation”. Any user account on Mastodon thus has two components – it identifies both their handle/username, plus the name of the instance that account and its content are originally hosted on, e.g. @The_BFOOL@digipres.club. Each user is also then going to have three major timelines:

Again, that last one is the trickiest to understand exactly what it’s showing you. I believe that instances are not technically “federated” to another until a user on one instance – *any* user – follows a user on another instance. At that point, public posts from the second instance’s Local timeline start showing up in the first instance’s Federated timeline.

I’ll be honest, I don’t look at/use the Federated timeline much. I think the idea is you can use it to find other/new people by a sort of “friend-of-a-friend” recommendation – these are people followed by people YOU’VE chosen to follow, or that belong to your local community instance – so maybe you’ll be interested in what they have to say. It is super fascinating to occasionally take a peek – particularly if you’re federated with one of the bigger, general instances, like mastodon.social (the “flagship” server/instance, led and maintained by Mastodon’s creator, Eugen Gargron).

But most of the time, I find the strength of Mastodon is in the local timeline/instance. These are opportunities, like the web forums of old, for communities to build and define themselves – each host has to decide what their instance is for, what makes it unique enough for people to choose to make a user account on *this particular* Mastodon instance rather than another.

(To be clear, the whole federated angle also means you can easily sign up for multiple Mastodon accounts, on different instances, if you’re interested in different communities – for example, I regularly check @The_BFOOL@digipres.club, but I also have @The_BFOOL@octodon.social, another general-purpose social instance that was where I first tried out the platform. That means, in its infrastructure, Mastodon is a kind of cross between Twitter and email – any one of us could have both an @gmail.com account and an @yahoo.com  account, which can talk to each other and everyone else on email despite being hosted in different places) 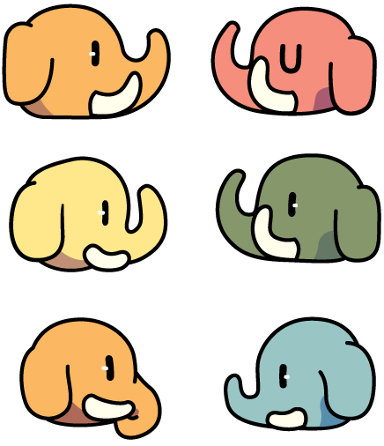 To me, this infrastructure combines the best parts of Twitter – self-determination (the ability to create your own gaggle of thought-provoking voices), and a network of professional questions posed and answered in a quick, informal setting, encouraging participation and leveling the playing field from the documented social biases of peer-reviewed publications and organizations – while eliminating the worst bits: ads, development priority on UI updates over functionality, uhhhhh Nazis (and/or people talking about Nazis, which to state the obvious is far far less immoral/unethical/illegal than *being* or *promoting* a Nazi, but is exhausting).

That last bit is actually kind of crucial – many users (esp., it seems, various minority communities) flocked to Mastodon because it has way more sophisticated settings for moderation than Twitter, both on the side of the administrator who hosts/runs the server (who can block users from their instance, close off federation from instances that host hateful or illegal content) and, critically, the user (there is a fantastic, easy “content-warning” system that lets users sensitively publicly post potentially traumatizing/triggering content “behind” a warning; allowing other users to choose to see that content rather than have it shoved in their faces; also, there’s multiple permissions available for every single post, beyond just direct messaging with one user and posting publicly for the entire world to see). The controls can, again, take a little getting used to – because of the way permissions are set up, it can be disconcerting to see posts intended as a private conversation with one other user appear in your timelines alongside totally public content (but rest assured, as long as you chose the right setting, you and the intended recipient are the only ones seeing it). 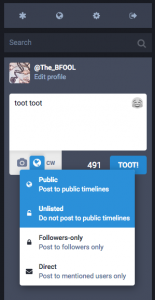 Like with so many other open-source projects, it’s about taking a good idea (online social networking is, removed from the many many problems it has come to be identified with in execution, not an inherently bad concept) and removing some degree of tech capitalism from the equation, giving more customization and control back to individual users and communities. This whole concept is nothing new: internet history is littered with similar projects that have come and gone based on the social technology/platform du jour – forums, instant message chat clients, etc. etc; what’s new is the current “microblogging” appeal, mixing text, links, images, etc., in quickly-digestible, constantly-updating fashion.

Here’s the thing: that does not mean, at all, that Mastodon instances/communities don’t or won’t have their own problems. Building a community – online or anywhere else – also should mean caring and protecting for that community. An enforceable Code of Conduct or at least community guidelines, people who are willing to take on the task of administrating not just technical systems and software, but *people* – I believe that wherever people come together in public conversation, some thought needs to be put into these things to create a truly lasting, fair, empathetic, and constructive community.

So, to circle back to the original question. Maybe now you better understand from a technical standpoint what a Mastodon instance is, but that doesn’t really answer…what is digipres.club?

I made the first attempt at digipres.club – a Mastodon instance for users who, in my head, wanted to have professional-but-informal conversations about digital preservation – last summer. It was only a week or two before I realized I was in over my head as a sysadmin (I wish I had taken screengrabs of some of my Terminal screens, but it wasn’t pretty). I’m a firm believer in learning-by-doing when it comes to tech, but just speaking for myself and my own ability, this was a step too far, considering the end goal. Administering a server/Mastodon instance means taking some responsibility for other people’s content. I recognized my technical ability/understanding wasn’t there yet to properly commit to that. And when I got the first monthly bill for the Digital Ocean server droplet I was hosting on, I realized that I really didn’t know what I was doing even in terms of choosing a sustainable hosting option.

So I shut down that whole instance (there were only a handful of users onboard at that point, but I do apologize for not giving more notice about that). But as more people in the Twitter digipres community seemed to hear about/get interested in Mastodon, Joshua Ng, who works in IT at the Asian Film Archives in Singapore, decided to take another crack at digipres.club. I gladly gave over the domain name. Joshua is and will be a far more talented sysadmin than I am – the site has been up for a month or two now, federation and authentication for logging in from mobile app clients are functioning properly, and there’s almost 100 users signed up for the instance – all way more than I could say about my aborted attempt!

That said – and I think Joshua would agree here – digipres.club is also very much a work in progress. There’s a great starter description for the instance, but I know some of the same people in this nebulous online-archives/libraries/information sphere have expressed interest in a more generalized Mastodon community for GLAM workers. Personally, my interpretation of “digital preservation” is that it’s a very very wide umbrella and can encompass pretty much literally everything GLAM workers do – it’s a digital world, so I feel like all preservation activities – and that includes access activities, because what is preservation without access – either is or leads to digital preservation. But, this is the whole point of decentralizing and community-building; some people can spin off into another instance if digipres.club is not what they’re looking for, and as a member of digipres.club I can choose to connect with them from a distance, move over and join them directly, join both, do whatever I want. Free as in libre!

If it’s really going to keep going, building a social online digipres community requires community support. That’ll mean things like finding ways to financially support Joshua (hosting costs money – we can’t completely remove ourselves from the global tech market here). It might mean things like establishing posting guidelines or a CoC, and finding people willing to be community managers and enforce those guidelines. Asking someone to be both sysadmin and community manager, solo, to have responsibility over tech *and* people, is a lot – it requires different skills, which one person may or may not have!

So the next and last question is….do you want to come help us figure it out? The DigiPres Club is waiting!