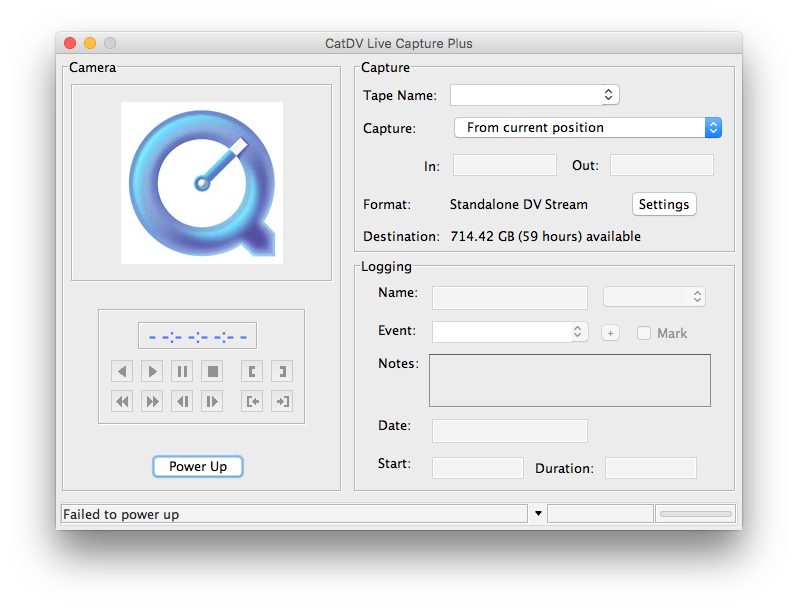 One of the particular challenges of video preservation is how to handle and preserve the content on digital tape formats from the latter days of magnetic A/V media: Digital Betacam, DVCam, DVCPro, etc. Caught in the nebulous time of transition between analog and digital signals (the medium itself, magnetic tape, is basically the same as previous videotape formats like VHS or Betacam – but the information stored on them was encoded digitally), these formats were particularly popular in production environments but there were plenty of prolific consumer-grade efforts as well (MiniDV, Digital8). In some ways, this makes transferring content easier than handling analog formats: there is no “digitization” involved, no philosophical-archival conundrum of how best to approximate an analog signal into a digital one. One simply needs to pull the digital content off the magnetic tape intact and get it to a modern storage medium (hard disk, solid-state, or maybe LTO, which yes I know is still magnetic tape but pay no attention to the man behind the curtain). 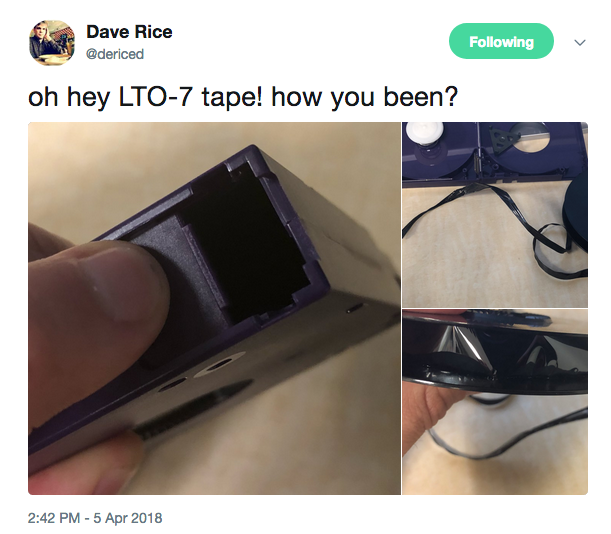 However, even if you still have the proper playback deck, and the right cables and adapters to hook up to a contemporary computer, there’s the issue of software – do you have a capture application that can communicate properly with the deck *and* pull the digital video stream off the tape as-is?

The last bit is getting especially tricky. As DV-encoded formats in particular lost popularity in broadcast/production environments, the number of applications that can import and capture DV video without transcoding (that is, changing the digital video stream in the process of capture), while staying compatible with contemporary, secure operating systems/environments, has dwindled. That’s created a real conundrum for a lot of archivists. Apple’s Final Cut Pro application, for instance, infamously dropped the ability to capture native DV when it “upgraded” from Final Cut Pro 7 to Final Cut X (you can hook up and capture tapes, but Final Cut X will automatically transcode the video to ProRes). Adobe Premiere will still capture DV and HDV codecs natively, but will re-package the stream into a .mov QuickTime wrapper (you can extract the raw DV back out, though, so this is still a solid option for many, though of course for just as many more an Adobe CC subscription is beyond their means).

One of the best options for DV capture is (was?) a Mac application called Live Capture Plus, made by Square Box Systems as part of its CatDV media suite. It has great options for error handling (e.g. trying to read a problem area of a tape multiple times automatically if there’s dropout), generating DV files based on clips or scenes or timecode rather than the whole tape, remote tape deck control over the FireWire/Thunderbolt connection, etc; a bunch of ingesting stuff that’s more appealing to an archivist than an application primarily for editing, like Adobe Premiere. It also talks to you, which is fun but also terrifying.

However, Square Box removed Live Capture Plus from its product list some years back, and as far as I’m aware has refused all pleas to either open-source the legacy code or even continue to sell new licenses to those in the know.

Let’s say you *are* lucky enough to still have an old Live Capture Plus license on hand, however. The Live Capture Plus GUI is built on Java, but an older, legacy version of Java, so when you first try to run the app on a contemporary OS (~10.10 and up), you’ll first see this:

Luckily, for at least the moment, Apple still offers/maintains a download of this deprecated version of Java – just clicking on “More Info…” in that window will take you there, or you can search for “Java for OSX” to find the Apple Support page.

OK, so you’ve downloaded and installed the legacy Java for OSX. Yet this time, when you try again to run Live Capture Plus, you run into this fun error message instead: 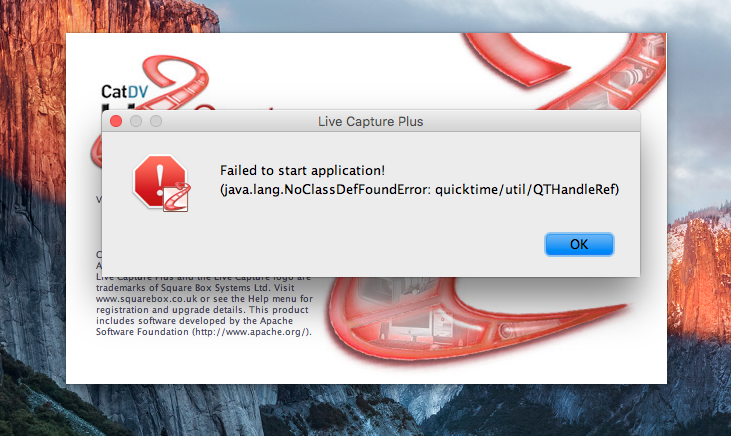 All right. What’s going on here?

When I first encountered this error message, even though I didn’t know Java, this error message provided two clues: 1) “NoClassDefFoundError” – so Java *can’t find* some piece that it needs to run the application correctly; and 2) “quicktime”/”QTHandleRef” – so it specifically can’t find some piece that relates to QuickTime. That’s enough to go on a search engine deep dive, where I eventually found this page where researchers at the University of Wisconsin-Madison’s zoology/molecular biology lab apparently encountered and solved a similar issue with a piece of legacy software related to, near as I can figure from that site, taking images of tiny tiny worms. (I desperately want to get in touch and propose some sort of panel with these people about working with legacy software, but am not even sure what venue/conference would be appropriate)

So basically, recent versions of Mac OS have not included key files for a  plugin called “QuickTime for Java” – a deprecated software library that allowed applications built in/on Java (like Live Capture Plus) to provide multimedia functionality (playback, editing, capture) by piggybacking on the QuickTime application’s support for a pretty wide range of media formats and codecs (including DV). Is this fixable? If you can get those key files, yes!

For now, both the downloads and instructions for what to do with these three files are available on that Hardin Lab page, but I’m offering them here as well. The fix is pretty quick:

I would only note a couple things, which is that I’ve successfully installed on to macOS Sierra (10.12) without needing to mess with the System Integrity Protection settings by just installing for the local user (i.e. putting the files into ~/Library rather than /System/Library); and that if you want to do this via Finder rather than the command line, here is how to get to the “View Options” box to reveal the Library folder in Finder, as mentioned in Step 1 above (a useful step in general, really, if you’re up to digipres shenanigans): 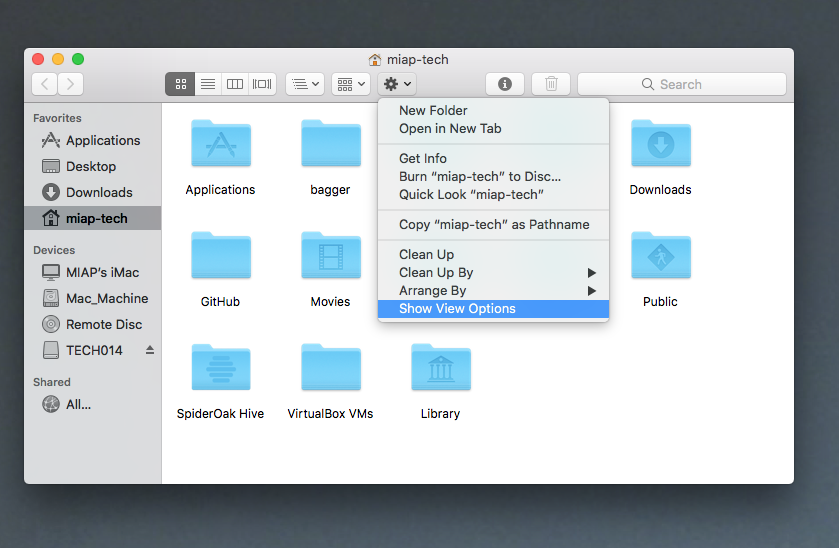 Once these files are in place, Live Capture Plus should open correctly and be able to start communicating with any DV/FireWire-capable deck that you’ve got connected to your Mac – again, provided that you’ve got a registration code to enter at this point.

A final word of warning, however. Live Capture Plus comes from the era of 32-bit applications, and we’re now firmly in the era of 64-bit operating systems. Exactly what all that means is probably the subject of another post, but basically it’s just to say that legacy 32-bit apps weren’t made to take advantage of modern hardware, and may run slower on contemporary computers than they did on their original, legacy hardware. Not really an issue when you’re in video/digital preservation and your entire life is work-arounds, but recently Mac OS has taken to complaining about 32-bit apps:

Despite 32-bit apps providing, near as I can tell, no actual security or compatibility concerns for 64-bit OSes (32-bit apps just can’t take advantage of more than 4GB of RAM), this is a pretty heavy indication that Apple will likely cut off support for 32-bit apps entirely sometime in the not-so-so-distant future. And that will go for, not just Live Capture Plus, but other legacy apps capable of native DV transfer (Final Cut 7, the DVHSCap utility from the FireWire SDK, etc.)

So go get those DV tapes transferred!!!!