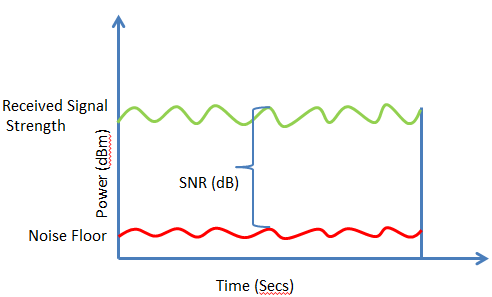 This is a guest post written by Jeff Lauber, based on his paper originally written for a course on “Video Preservation” in NYU’s M.A. program in Moving Image Archiving and Preservation.

Jeff is a media archivist based in New York City. He currently works as an archivist for Jenny Holzer Studio in Brooklyn and carries out freelance archival projects for a number of NYC institutions.

In its most basic sense, signal-to-noise ratio (SNR) explains itself: the proportion of noise present in transmission of a given signal compared to the pure signal itself. In more technical terms: “the dimensionless ratio of the signal power to the noise power contained in a recording […] the signal-to-noise ratio parameterizes the performance of optimal signal processing systems when the noise is Gaussian [i.e. normally distributed and/or predictable].”​1​ Applicable in numerous fields in which imaging and/or transmission of electronic signals are used, SNR allows for a more precise understanding of how accurately a signal is being received. In the preservation of videotape, SNR can act as an important indication of whether or not audiovisual signals from the tape are being captured properly and with minimal unwanted background noise in the analog-to-digital conversion process.

Noise in magnetic/electronic audiovisual signal transmission can be the result of a number of factors. In its most common instance, noise is perceived in the video signal as “snow” and is the result of random electrical disturbances in the signal transmission process. Most of this random noise is white (i.e. distributed evenly across the frequency spectrum) and is introduced to the signal via components that contain low signal levels such as camera imagers, videotape recorders, cable circuits, and broadcast receivers.​2​ In fact, noise can be introduced into the signal at any stage in the recording and transmission process; as Jim Lindner importantly notes, “the impact [of introducing noise into the signal] is cumulative over the entire signal chain and is not necessarily just an issue of the magnetic media itself or of a problem with magnetic fields in storage.”​3​

In general, the SNR of analog recording media and electronics has improved in tandem with advancements in technology. Though natural to both analog and digital recordings, noise has often been considered impure and undesirable in audiovisual signals, and efforts to improve recording technology over the years were intent on achieving the highest possible SNR, i.e. the lowest level of noise proportionate to the audiovisual signals.​3​ Video SNR is most often expressed in decibels and, in more precise terms, is the “power ratio […] of the peak-to-peak signal voltage or current, from black level to reference white but not including the sync pulses, to the rms [sic] value of the noise.”​2​ The noise power in a video signal can be expressed as either a weighted or unweighted value. Unweighted noise is an expression of the noise power in a given signal and can be determined mathematically/logarithmically or using an instrument with a uniform frequency response which quantitatively measures the output spectrum of a signal transmission. Weighted noise takes into account the noise that the average human can visibly perceive in a video signal: by considering factors such as natural eye response, screen brightness, and scan-line width, among others, the weighted factor simulates the aperture response of the human eye to adjust the noise power measurement to what can be visually perceived.​2​ In general, weighted noise measurements result in a SNR that is about 8dB higher than unweighted, the greater proportion a result of adjusting the factor for noise that is present in the signal but cannot be visually perceived.​4​ A final important consideration when measuring the SNR of a given video signal is to factor in time : in terms of human perception, still frames of a film or video image appear noisier than moving images, eye-brain coordination generally integrating around six frames of a video image to improve the SNR. It is noted that incorporating a 0.2 second factor into the mathematical equation to calculate SNR is good practice in that respect.​5​ In broadcast television, weighted SNR of between 43 and 53dB is considered reasonable, though newer analog and digital technologies have become capable of ratios far greater.​2​

SNR is an important factor to consider in the analog-to-digital conversion of videotape signals and in video- and audiotape preservation generally. In the simplest sense, awareness of noise and its proportion to the pure, desired audiovisual signal is essential. Lindner notes that many people—notably younger generations whose lives have been predominantly digital—have come to expect pure, seemingly noiseless image and sound quality from audiovisual content. However, both visual and audible noise are natural qualities of analog recordings.​3​ Thus, attempting to reduce noise in analog-to-digital transfer of video- and audiotapes has the potential to inaccurately capture intrinsic noise qualities if done too severely.

In a technical sense, digitization of analog videotape must take into consideration the SNR of a given audiovisual signal since, as with signal amplification and transmission, the digitization process involves sending a signal through multiple components or pieces of equipment, each of which has the potential to introduce noise. This consideration is especially pertinent given that noise is additive in analog systems, i.e. noise accumulates at every stage of the recording, transmission, and/or digitization process.​2​ Converting the waveform of analog audiovisual content into quantized, digital values in general introduces error, and the quality of the recording or presence of noise is also determined by the number of bits per sample. The signal to quantization noise ratio (SQNR), in that respect, measures the difference between the signal and the noise introduced in quantization; it has been noted that every bit adds around 6dB of resolution to the digitized signal so that a 16-bit sample, for instance, would allow for a maximum SQNR of 96dB.​6​ An awareness of target SNRs and methods for maximizing the ratio of digitized content can help ensure cleaner, more accurate digital transfer.

However, when dealing with analog videotape and transmitting its signal, noise is an inevitability; even when sample size is significant and even when other measures are taken to reduce noise in the signal path during digitization (e.g. minimizing the length of the path and the number of components used – literally, shorter cables and less equipment, if possible), there is an “irreducible amount of noise superimposed on the signal each time the camera image is read out, amplified, and digitized.”​7​