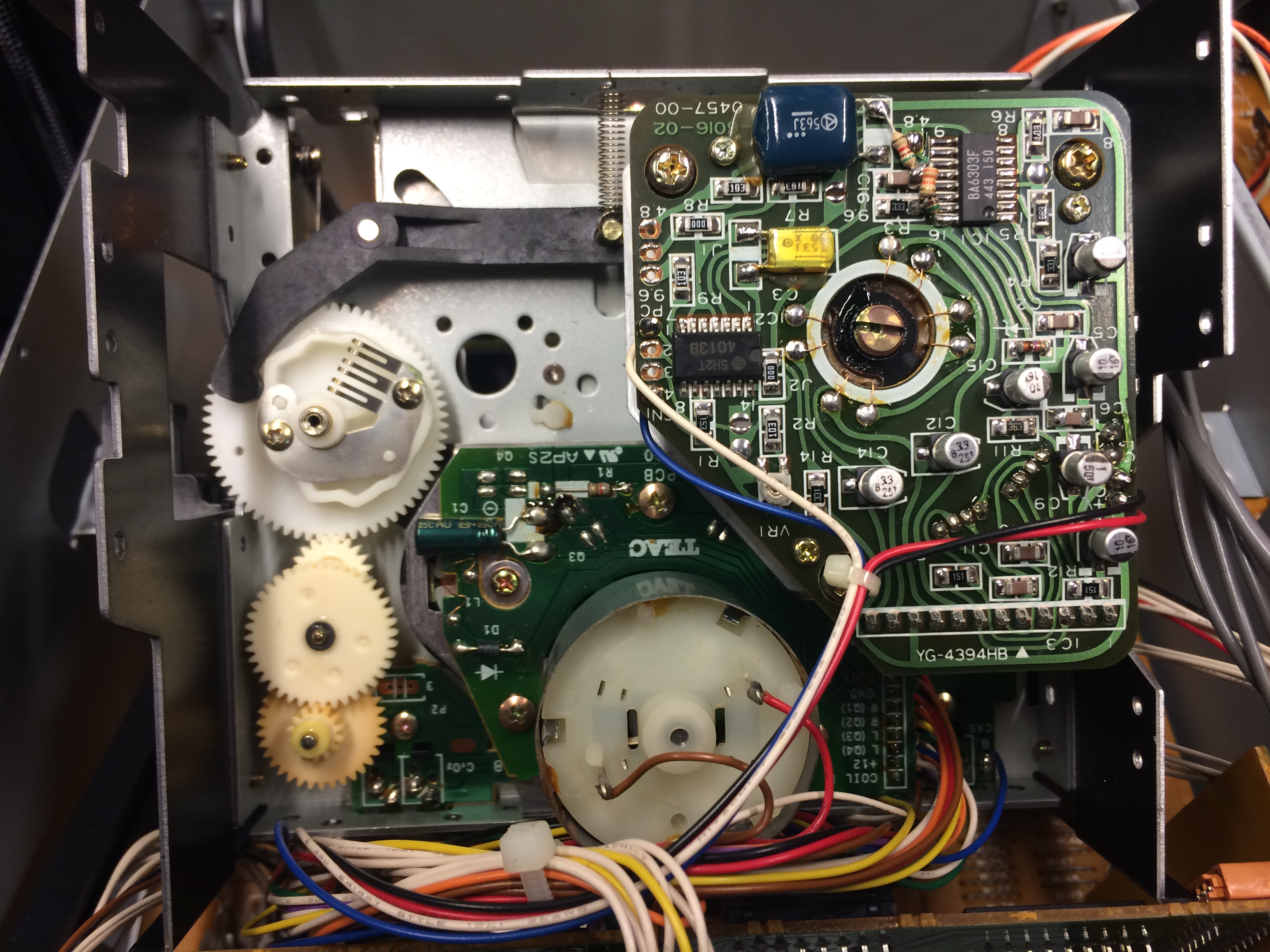 When last I left you, dear readers, I was stymied in my attempts to transplant a broken gear in a Tascam 112MKII audio cassette deck with a healthy replacement. A few tiny, inconveniently placed screws were stripped such as to prevent getting to the heart of the matter (or the deck). I investigated some options for purchasing screw extraction bits for our power drill, and have indeed added those to my box of toys (*cough* I mean tools) since.

But I am not a patient man, which meant I went in for another round of futility because hey, what am I going to do, break the deck more? (I mean yes, I absolutely could do that but THAT IS NOT WHAT THIS BLOG IS ALL ABOUT). After failing at the so-called “rubber band method” (I just have a bunch of rubber bands with screwdriver-tip-shaped holes in them now), I took the suggestion of one of our Cinema Studies PhD candidates and applied a vice grip.

Leverage was near-impossible when trying to turn a 3mm-wide screw with a giant vice grip at a weird 45-degree angle. Yet somehow, yes, I was able to loosen the stripped screw enough to get in there and manually twist the dang thing out. Surgery back on track!

Now able to remove the cover housing the gears for the playback mechanism, I could finally get to the clearly offending piece of the puzzle. Yes, it is difficult for your cassette deck to keep running when one of the delicate plastic pieces inside literally cracks in half:

At first, since it was such a clean break, I did idly wonder if I could just super glue the broken gear back into place, and even made a quick stop at the hardware store around the corner over my lunch break (as is my approach to most tools or supplies, I tend to just try to buy whatever I can think of, under the assumption that even if I end up not needing it now, it will almost certainly prove useful at some point later). I don’t know how archivally sound the combination of Krazy Glue adhesive is with whatever plastic this gear is made out of (it almost surely wouldn’t have held up for another couple hundred tapes), I realized that the point was kind of moot, because even past the obvious, giant chunk of the gear that had snapped clean off, less noticeably the teeth on the smaller inner part of the piece had also been totally worn down, and were also likely not catching properly in the mechanism.

So, back to the replacement part then. Going back over I tried to take out the healthy gear from our backup 122MKIII…

…a process that literally took about 30 minutes. See, all I had the do was lift the gear out – but whatever lubricant had been placed on the gear shaft of this deck had morphed, over years of disuse, into a pretty strong adhesive. That gear was stuck tight, and, considering the broken-in-half example right at my disposal, I had a hunch this piece was kind of fragile. It would be pretty useless to snap a gear while in the middle of replacing a snapped gear, so I had to be extreeeemely patient and just ever…so…gently…wiggle the gear off the shaft, most of the time never apparently doing anything at all (in fact, if it hadn’t been for the fact that the broken gear lifted out so easily of the 112, I probably would’ve assumed I was doing something wrong with the intact one).

But, once that finally came free and I took a minute or two to revel in the satisfaction, I was finally able to piece back together the gear assembly on the 112, and a few manual turns seemed to confirm that the motor would now spin correctly. By all outward appearances, this was a successful transplant and I hurriedly packed the tape transport unit back into place to test my handiwork. For one brief, shining moment, as I pressed the Play button, the motor whirred, the gears turned, and all sounded healthy as the tape started moving forward at normal speed and the meters bounced.

Then a second later, the head assembly kicked out of playback mode. Trying again, the same thing: playing back fine for a second, then the system automatically refused to keep going.

Unlike last time, there were no hideous noises emanating from the deck, and the lights on the transport buttons on the front panel were not freaking out. The lights on the programmable buttons (RTZ, LOC1, LOC2, etc.) were now constantly on – but I could not tell when exactly that had happened, and in any case they still appeared to be responsive (I could set a zero location, fast-forward the tape, and then automatically return to that location, for instance). So that seemed unrelated to the tape refusing to stay in playback mode. 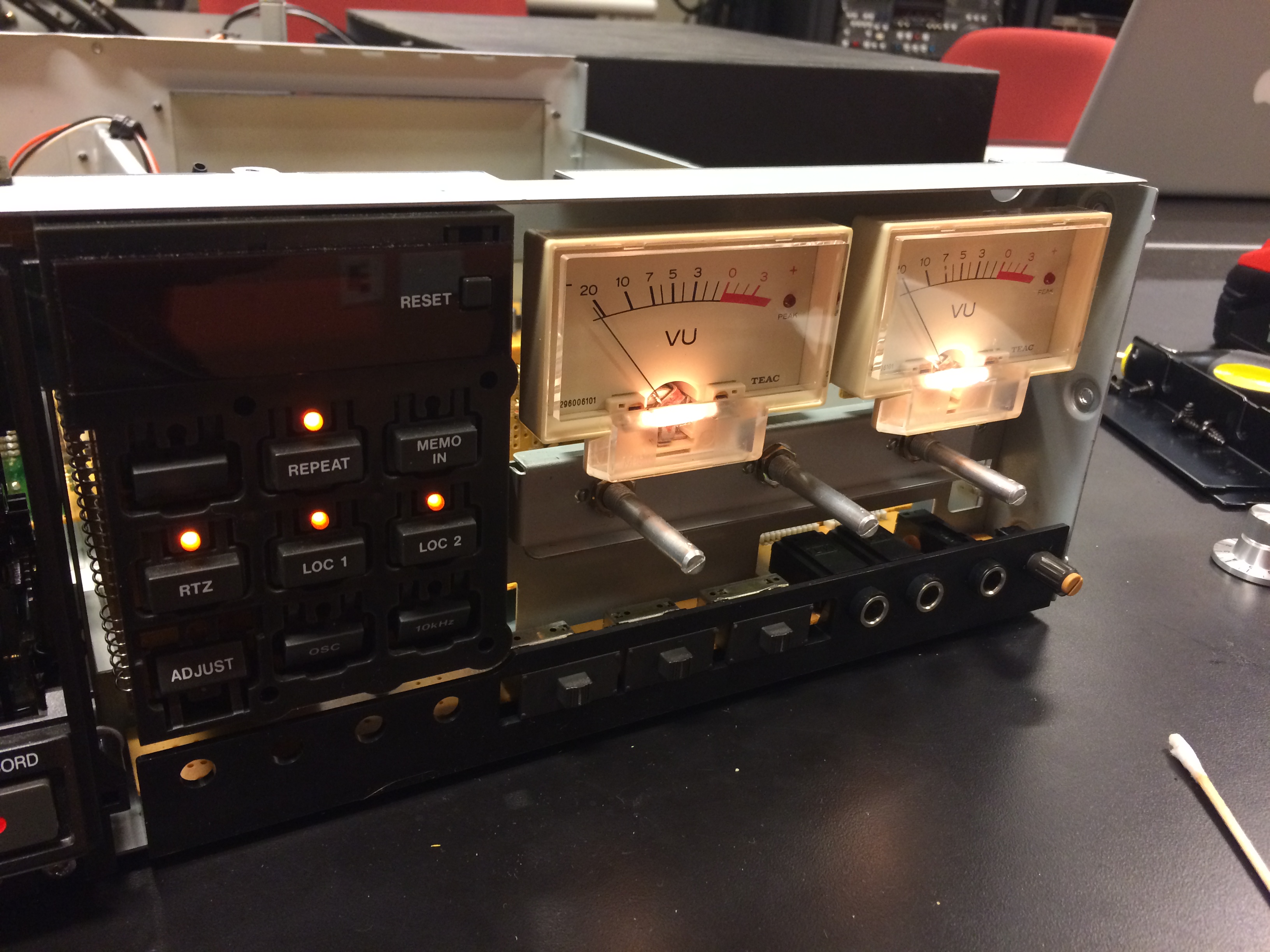 After a few more repeated tries I still couldn’t figure out what was happening, so I hit eject to remove the tape and take another look at the transport mechanism in case I missed something – which is when I saw this:

Hmm. Why was the tape loose in the cassette? Winding the tape back tight (oh how long has it been since I had to manually wind a cassette with my finger? too long, for this ’90s kid), I took a closer look at the cassette itself as I attempted playback. At which point I saw that when I hit Play, the supply spindle (the side of the cassette on which the tape is wound) on the cassette would start spinning, but the take-up spindle (where the tape winds after passing over the heads and playing) refused to budge – meaning that after passing over the playback head and through a pinch roller, the tape would just sort of loosely dump into the cassette for a second or two, until the pinch roller presumably detected that it had lost tension and automatically kicked the head assembly out of playback mode, to protect the cassette and the deck from getting damaged by out-of-control tape. 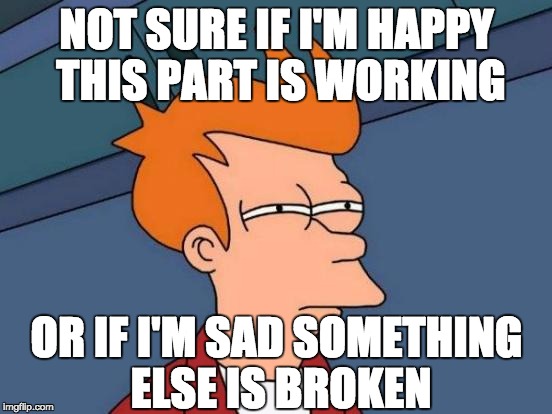 And that, essentially, is where I am stuck right now. The take-up spindle has no obvious motor driving it, and I am pretty confident I didn’t damage that part of the transport unit during disassembly – although, given the fact that the 122, which I am essentially using as a model of what the mechanism on the 112 should look like, doesn’t spin at all, I can’t say that for sure. So why is it not turning during playback? The only thing I can think of is that somewhere in the transport unit is a sensor that communicates with the take-up spindle that I somehow mucked up – although, again, the spindle turns completely normally during fast forward and rewind. And if I actually sit there and manually spin the take-up spindle, playback continues normally. But that is not exactly the most practical solution, since I have, you know, at least some other work to do.

If anyone has further suggestions, I’m all ears, but at this point I’m further investigating backup decks and probably bringing in a more experienced audio technician to perform a repair – at this point I would at least have a very specific issue to bring to them, which would hopefully keep the repair quick and therefore relatively inexpensive, since freelancers charge by the hour.